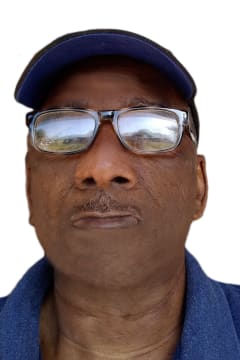 Mr. James Reeves passed on Thursday, December 29, 2022. Visitation will be held on Friday, January 6, 2023 from 12:00 Noon until 4:30 P.M. at Trice Funeral Home Chapel. Funeral service will be held on Saturday, January 7, 2023 at 11:00 A.M. at Trice Funeral Home Chapel. Interment will be held in Shady Grove Cemetery. Trice Funeral Home of Thomaston is in charge of all arrangements. Please keep the Reeves family in prayer. Mr. James Reeves was born on July 18, 1947, to the late Mrs. Maybelle Clemmons Reeves and the late Mr. Jerry Reeves, Sr. in Thomaston, Upson County, GA . He attended public school at Drake High School. When he reached adulthood, he entered the work force by working at Martha Mills for approximately three years. He later found employment driving the school bus and working part-time jobs. James decided to venture out and earn his CDL license. After obtaining them, he began driving across country in his big rig. He started out driving for M.S. Carrier and later for Smith Transports. He loved being on the road, and he drove a total of thirty-two years. He would never get close to Thomaston and not stop in his hometown, even if it was just for one day. He loved his family and stayed in touch with them. He met Lisa Marie Wiggins in 2005; and on July 18, 2005, they were joined in marriage. They made their home in Toledo, OH In 2009, their union was blessed with the adoption of a son, James Alexander Reeves. He was excited about being a father and accepted the role wholeheartedly.

After retirement from driving, James made himself content in Toledo, OH. He always had his beloved hometown and friends in his heart. He had some friends whom he would call every week, some every day, and some even twice a day to stay in touch. During his leisure time James enjoyed talking on the phone; going to the casino; watching all sports, especially Tiger Woods, Serena Williams and the Georgia Bulldogs; and spending time with his family. He was preceded in death by his parents; four brothers, Grady Reeves, Johnny Reeves, Jerry Reeves, Jr., and Willie Fred Reeves; and one sister, Annie Clara Spivey. On Thursday, December 29, 2022, the Lord called his name He answered the call and went home to rest. He will be greatly missed by his family and his dear friends. James leaves to cherish his memory, his wife, Mrs. Lisa Marie Wiggins Reeves of Toledo, OH; one son, James Alexander Reeves of Toledo, OH; two stepchildren, Ms. Lateasa Wiggins of Stone Mountain, GA and Ms. La Sonya Jelks of Toledo, OH;; eight grandchildren and three great-grandchildren, mother-in-law, Ms. Elizabeth Wiggins of Toledo, OH; one nephew, Mr. Robert (Peggy) Little of Thomaston, GA; sister and brother-in-law, Mrs. Patrice (Louis) Polelinitz and Mr. Terry D. Wiggins of Toledo, OH; four devoted friends of 50 plus years, Mr. John Vaughn of Barnesville, GA, Mr. Charlie (Martha) Trice of Columbus , GA, Ms. Annie Reviere of Atlanta, GA and Evangelist Sandra T. Trice, of Thomaston, GA; other friends include Ms. Debra Jones, of Barnesville, GA, and the Garage Crew of Toledo, OH; and a host of nieces, nephews, cousins, other relatives and friends.

Send flowers to the service of Mr. James Reeves