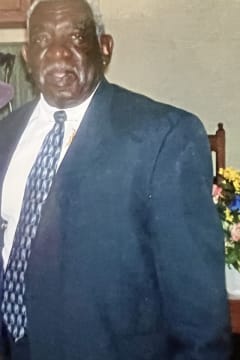 Rev. Leroy Britt, Sr, was born in Zebulon, Pike County GA to the late Mrs. Sylvester Slade Britt and the late Mr. Leon “Pop Corn” Britt on August 16, 1938. At an early age, he joined the Fuller Chapel United Methodist Church. Rev. Britt received his early education in the Pike County School System and graduated from Pike County High School. After high school, he found employment with his father at the Peach Canning Plant. He soon enlisted in the United States Navy. He served from December 1, 1955, until August 14, 1959, and received an honorable discharge. Upon his return home he found employment at the Martha Mills. He was a faithful and dedicated employee for 25 years and earned his way up to a supervisory position. He also attended Upson Technical College and earned a degree in drafting and auto mechanic.

In 1964, Rev. Britt met Ms. Janie Mae Seay. He captured her heart, and they were joined in Holy Matrimony on July 6, 1964. To this union, two children were born, Cynthia and Leroy Jr. He later joined the Cedar Grove AME Church. He was faithful in the ministry, and he sung in the choir. Rev. Britt felt a calling to serve for the Lord in a different capacity. As a result, he accepted his call into the ministry. He preached his first sermon entitled, “I Had a Dream’, on December 24, 1977, at Cedar Grove AME Church. He soon was called to pastor. His first assignment was Allen Chapel AME Church and Bethel AME Church in Fort Valley, GA. He also served in Macon at Stinsonville AME and Bethel AME Churches. His longest tenure was in Wrens, GA on the Lofton Circuit where he served for over ten years. He was called to pastor in Thomaston at Saint Mary AME Church for two years and at Gray’s AME Church in Yatesville, GA for two years. He officially retired from pastoring in 2008.

In addition to his preaching, Rev. Britt had a joy for singing. He was a founding member of the Dixieaires Gospel Singers, where he sang and played the guitar. He never lost his passion for singing. In addition to being a devoted pastor, teacher of the word of God and leader, he was a loving and devoted husband for 58 years, devoted father, grandfather, and a role model to his nephews Michael and Darrell and many others. Rev. Britt was preceded in death by his parents; one brother Earnest Britt; and one sister, Annette Peoples. On early Wednesday morning, September 14, 2022, God called him home to eternal rest. He was greeted with “Well Done Thy Good and Faithful Servant, Well Done.” His work is completed, his golden voice is silent, and his soul is at rest. His memory will live on in the hearts of his family and all the lives he touched along the way.

Send flowers to the service of Rev. Leroy Britt Sr.