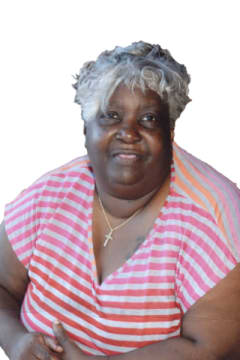 Emmett Jane Pendleton Chambers was born on Tuesday, April 10, 1951, to the late Mary Jane Wells and Emmett Dailey, in Louisville, Kentucky. She was the eighth of nine children. Quite early in her young life, she grew to understand what Jesus’s life and His life experiences all were about, so she accepted Him into her heart and confessed her faith and belief in Him. Star Hope Baptist Church became her church, and at that time, Rev. Raymond T. Teague was her pastor.

She was a student in the Jefferson County Public School System where her high school years were spent at Thomas Jefferson High School. School was okay, but what she loved almost as much as she loved the Lord were her children. Those children of hers were what some would say were her “ride or die partners”! Throughout their lives, Emmett made sure she was the best provider she could be for them and herself too. One of her main jobs was as a cashier at various stores which was not always an easy task, but she was a hard worker and a good provider for all who depended on her.

Send flowers to the service of Emmett Jane Pendleton Chambers